Last year, one of the landlords for whom we managed, surveyed our growing vacancy board and proclaimed it “rentpocalypse”.   In response, I looked at data from our monthly rental report that is published in the Abilene Reporter-News to make choate his observation.  What we discovered was 2016 relative to 2015 was a tough year;  homes remained empty longer when compared to the prior year.

This table, taken from these monthly reports, summarizes this landlord’s apocalyptic observations:

Numbers in red are bad – they mean more time on the market compared to same month in the previous year.  When evaluating the data:

I took these observations back to textbook supply and demand.  On the demand side:

On the supply side:

While the animal spirits of real estate investors aren’t measurable, the consequences of their enthusiasm is revealed in real estate transactions they book.  Last summer, Barnett & Hill researched this connection.  The Landlord’s Invisible Hand utilized Taylor CAD data to investigate the growing rental sector in Abilene since 2003.    Where are the Abilene Rentals? used the same data to compare a map of 2016 rentals to 2003 rentals to visually gauge the growth of local rentals, street by street. This year, we’ve added data for 2017 plus a few new maps that highlight neighborhoods with rentals.

Let me clarify what we are calling a rental.  Taylor CAD keeps an inventory of properties with a homestead exemption.  Homeowners have an incentive to file for this exemption because it reduces the homeowner’s tax burden.  Therefore, we feel homes that do not carry the homestead exemption are a reasonable proxy for rentals.

I parsed the data three ways: first for Abilene as a whole and then a tally for Wylie ISD and Abilene ISD.  Since the AISD boundary change of 1993 described in Who Moved My Equity: The Price of AISD Boundary Changes, Wylie ISD has grown at the expense of Abilene ISD, so it is helpful to consider the data in the context of school districts.

The Abilene ISD data demonstrates this districts receives the greatest share of rental growth. The peak year for adding rentals in the Abilene ISD was 2016 with 490 new rentals.  2017 brought higher lending rates and slowing gains in Abilene ISD rentals; 2017 saw an increase of 381 rentals added to the tax rolls.

In Who Moved My Equity: The Price of AISD Boundary Changes the impact of the 2007-8 closing Lincoln Middle School and the realignment of the middle school boundaries were assessed.  It is interesting to note that 2007 is the high water mark for homesteaded homes in the Abilene ISD at 19,783.

The dollar values expressed in the table are in real terms.  The housing Consumer Price Index has been used to adjust reported nominal figures to real figures to aid comparison between years.  This data underscores the conventional wisdom that homesteaded homes are worth more than rentals – there’s roughly a $50,000 difference between rentals and non-rental town-wide and in WISD; in the AISD the difference is just under $40,000.

An interesting observation is that since 2003, rental appraisals have grown faster than homesteaded appraisals.

Several of our landlords say “I just can’t find rentals like I used to”.  The growth in the appraised values provides evidence of this. Whatever you want to use to explain it – poor returns on other investments, cheap interest, a steady diet of HGTV shows,  – the artifact of increased demand is higher prices.  One can assume these appraised values mirror market conditions as landlords are aggressive when contesting taxes, annually evaluating their rentals to reflect market conditions.

When mapping rentals, Abilene ISD has Wylie ISD beat 3-to-1.  Several Abilene neighborhoods stand out as a preferred location for rentals. Neighborhoods like Lytle South, Abilene Christian University and what is sometimes referred to as the “four-way” are highlighted in red on the map.  This indicates an intensity of rentals in this location. 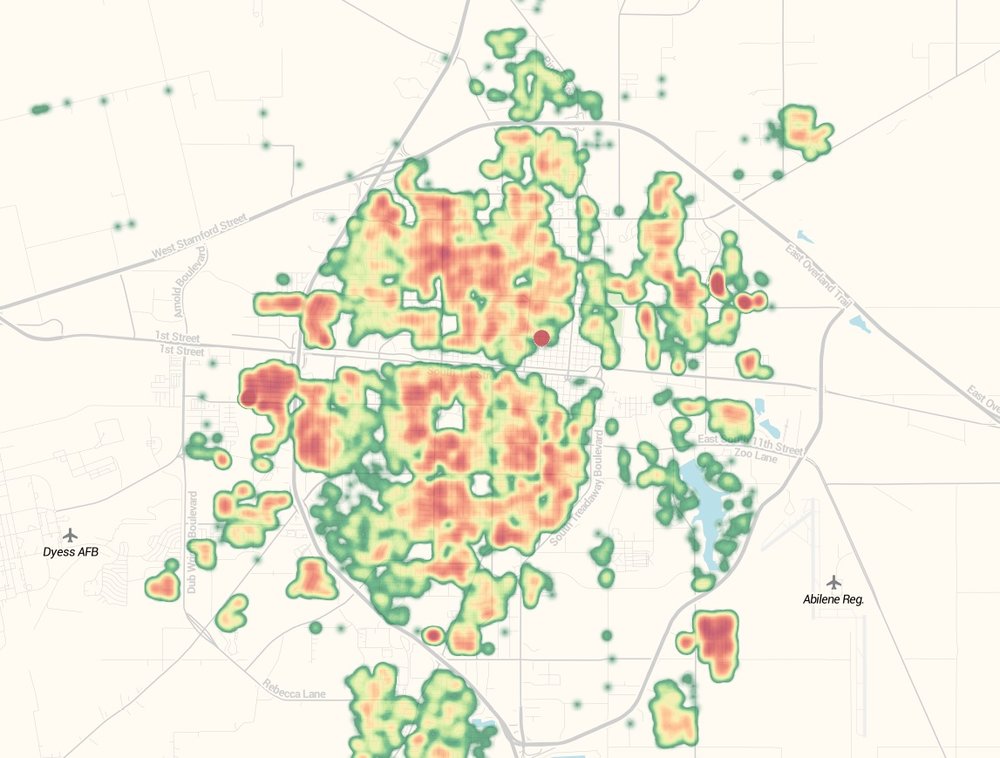 On the southside heat map, we see rentals presented at the condos below Redbud Park and then further south they are slightly manifested in neighborhoods like the Parkside Place addition and Mesquite Forest.. 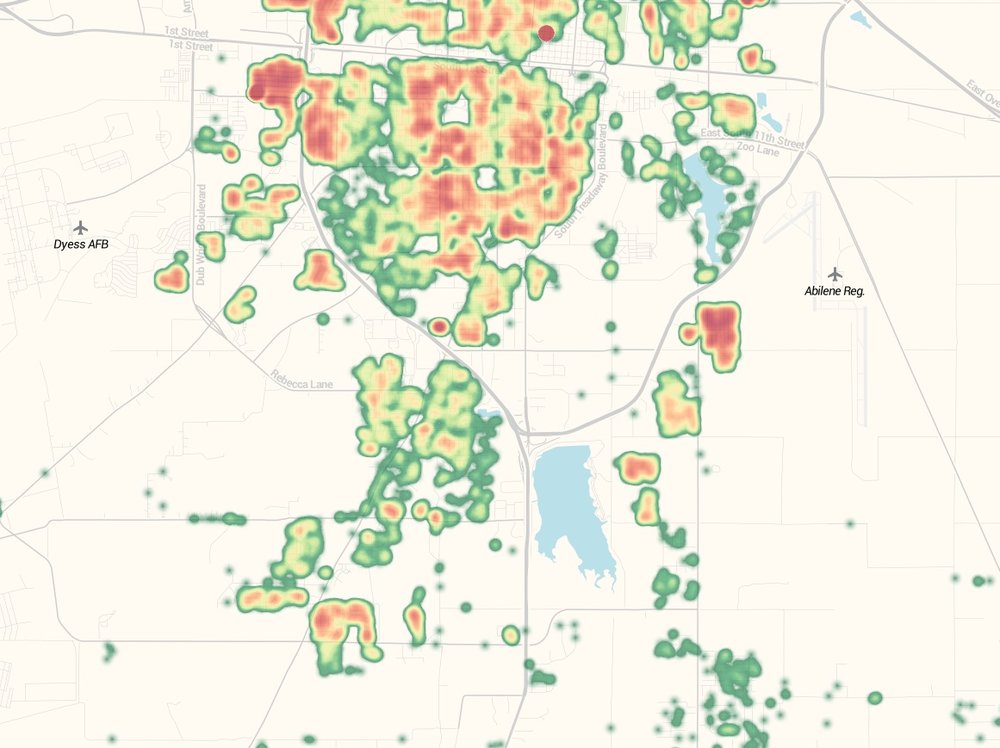 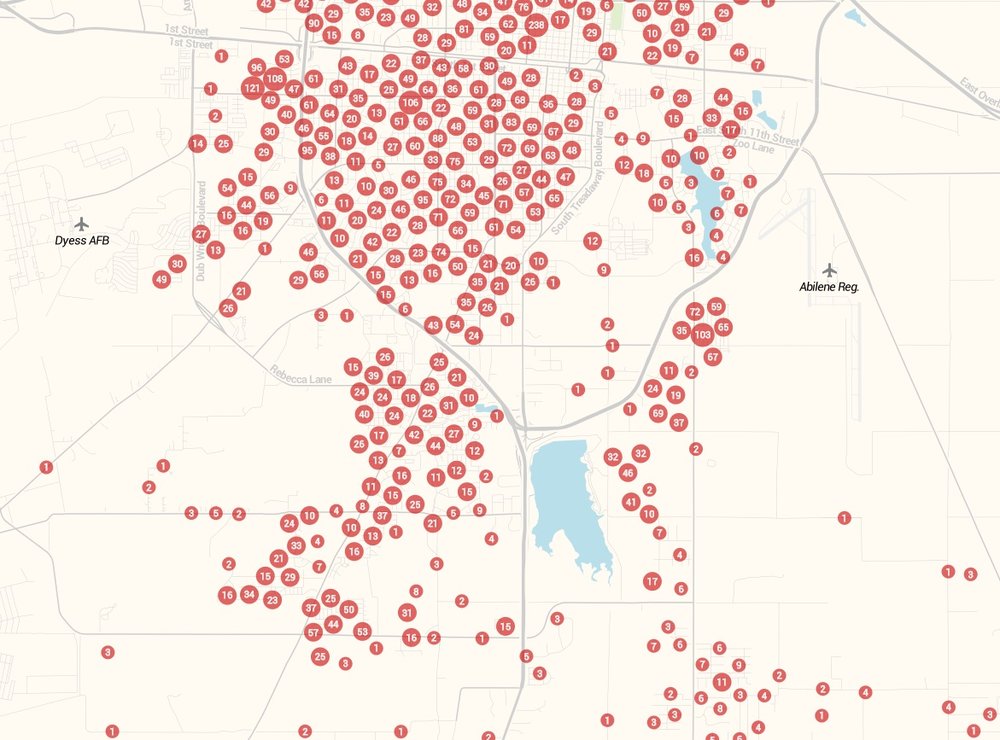