As an Abilene landlord who has leased property in this market since 2001, I know summer rentals move differently than in other months.  College students ask for 9-month leases that begin in August and families sign 12-month leases for a home they can rent before school begins.  Together, this creates a drift of end dates towards the months of May, June and July and fills our vacancy board with available units to let.

This summer seemed a little different.  Homes that rented quickly last summer stayed on the market longer.  A consultation with one landlord for whom we manage resulted in decreased rents for several of his vacancies to get them filled.  Conversations with other property management brokerages corroborated these events. As I generated our monthly rental report for August, I discovered that over the last 12 months, Abilene single family rent houses languished on the market longer than the preceding 12 months – anywhere from 2 to 17 days longer than the same month in the preceding year.

The fact that homes rented slower pointed to a softening market for rentals.  The question remained: what engineered it? Our answer lies in a basic tenet of capitalist though penned by Adam Smith in The Theory of Moral Sentiments:

Every individual… neither intends to promote the public interest, nor knows how much he is promoting it… he intends only his own security; and by directing that industry in such a manner as its produce may be of the greatest value, he intends only his own gain, and he is in this, as in many other cases, led by an invisible hand to promote an end which was no part of his intention.

Gaining sense of this intention-less end can be done through the use of local real estate data. Using information about single family residences acquired from the Taylor County Central Appraisal District, I was able to look at shifts in the inventory of single-family homes.  By making the assumption that non-homesteaded homes were rentals, I separated residences into homesteaded and non-homesteaded.  Given the fact that the relatively newer homes in Wylie ISD rent for $.20/sqft more than homes in Abilene ISD, I thought it worthwhile to look at homesteaded and non-homesteaded homes in both school districts. 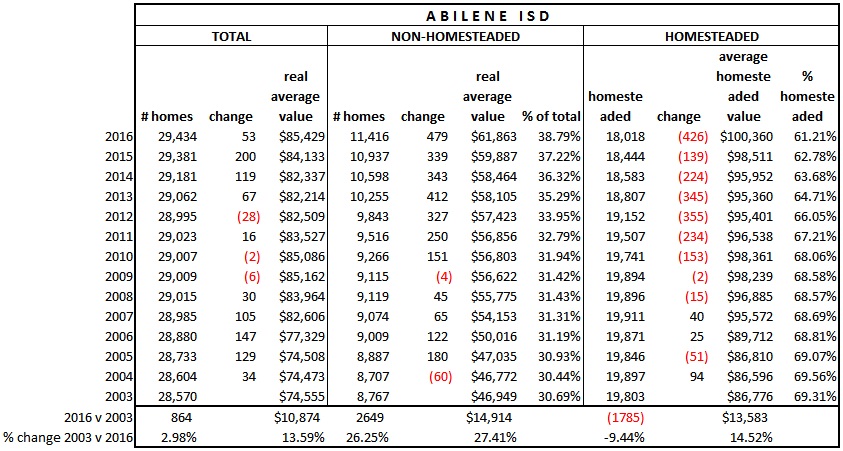 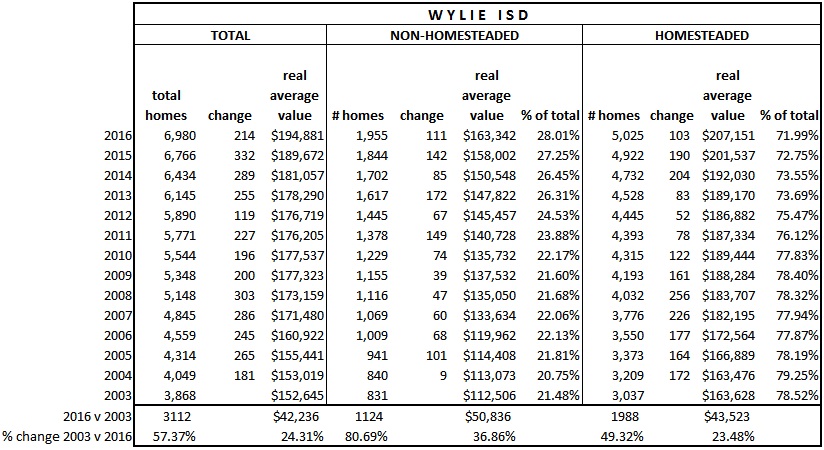 It is my opinion that some of this can be attributed to misguided boundary revisions by the AISD (see Who Moved My Equity: The Price of AISD Boundary Changes).  The single-ordered thinking of AISD school administrators and school board members engineered the migration of homeowners with means to Wylie ISD (and also underscores why education isn’t a legitimate academic field – it lacks any engine of analysis as it fails to give its adherents the ability to contemplate n-th ordered effects).

The fact that growth in rentals in Abilene ISD is more pronounced can be attributed to homeowner’s choices between the two districts.  A likely scenario plays like this: a new home is built in Wylie ISD, its new owner moves from Abilene ISD, and, as the data demonstrates, the odds are good the home they leave behind will become a rental.

Still, full blame can’t be placed on the observation that the faux training of the school boundary architects stripped them of their ability to consider consequences.  Between 2003 to 2008, AISD actually saw positive grown in homesteaded homes in three of those years.  This story changed following the economic downturn in the fall of 2008.  Unemployment was high, the economy was stagnant and monetary policy had driven the price of money to nothing. 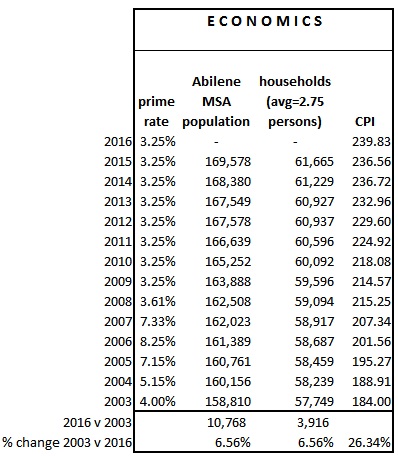 This reveals the primary cause of the growth in rentals: cheap money. To stimulate economic activity, the prime rate has been stuck at 3.25% since 2009.  Not only have homes been persistently cheaper to finance, the opportunity cost of placing equity elsewhere, e.g. mutual funds, certificates of deposit, cause investors to cast about to find an alternate return in the form of single-family homes.

For the last six years, the Abilene rental market has seen an annual increase in rentals from a low year of 231 in 2010 to a high of 606 in 2013.  2016 marked the second-biggest gain with 600 new rentals added to the Abilene market.  While this makes Barnett & Hill feel good about their prospects for growing the property management side of the brokerage, it also tempers our zeal as we make recommendations to aspiring landlords considering their first rental.  New landlords need to be aware that Abilene has seen rapid growth in the inventory of single-family rentals. A la the invisible hand, competition brings better options and rents for tenants.  For landlords, this translates into lower profits and more days a house may sit on the market.

One bright spot: while the last six years have brought cheaper money, the lending excesses prior to 2008 have brought tougher guidelines for lending.  This bolsters the demand for rentals and helps fill the growing inventory of rentals with tenants.  The last 6 years of landlord’s exuberance for rentals is not without basis; it’s a response to a need for housing for people with weak credit.

It’s also worth nothing that this trend marks the consolidation of local wealth and property ownership into fewer hands – a more Marxist extension of Smith’s invisible hand..  In this phenomenon, Abilene isn’t alone.  The national trend has been a shift towards renting over ownership.  Currently, the US has the lowest rate of home ownership seen since 1965.

Abilene MSA population growth and household count demonstrates a need for housing.  Since 2003 we’ve added 10,768 individuals to the Abilene MSA. If we consider that an average household size is 2.75 persons, this averages to a gain of 3,916 households for the Abilene MSA – a number that that is 60 units shy of matching the 13-year, 3,976 gain in homes over the same period.  Now that’s kind of near match that evokes the idea of a market-clearing equilibrium and makes the economist’s heart in me flutter with delight.

This pleasure is transitory because it fails to take into consideration multifamily housing which is also part of the market and unaccounted in this analysis.  It also fails to consider new multifamily inventory, most notably the new development across from Wylie High School that is poised to enter the market in fall 2016.  Considering our current single-family inventory in the context of this additional supply, it is no surprise that Abilene-area rentals spent more time on the market.  A pale consolation is that 2016 population figures aren’t accounted in this analysis – one can only hope that the 2016’s population uptick will plug the hole in the dyke.