Jane wanted to play tennis with her friends, a group of children she’s known since elementary school. They chose the courts at Madison Middle School based on convenience – a campus that would have been their middle school campus prior to AISD’s 1993 boundary changes. As I drove away from the courts, I thought: are the social arrangements achieved via boundary changes worth the price?

The price of social arrangements engineered by school boundaries is a moving target with adverse selection at its core. Like non-smokers who resist health insurance premiums devised on the health risk of smokers, people who resist boundary line changes refuse to accept the intangible social costs implicit in a boundary change and move. Their exit leaves a depreciating housing stock and smaller pool of individuals whose household income and demographics will be used to engineer the next round of boundary changes.  Subsequent revisions to boundaries generates another cohort of individuals that refuse to participate in boundary-engineered equity and another round of adverse selection ensues.

State-maintained education data 1 exists that allows us to look at Abilene ISD and Wylie ISD enrollment dating back to 1993 – the year that AISD redrew boundary lines to racially balance enrollment at its two high schools. In that same year, AISD had its peak enrollment with 19,717 students and began to lose students until 2006-7, 2009-10 and 2010-11. Abilene area population held steady during this period of declining AISD enrollment 2; the Abilene MSA only saw two years – 2001 and 2003 – when population fell. When considered over the last 22 years, Abilene MSA population growth has been negligible, exhibiting only a .4% annual gain in population. This is summarized in Table 1. 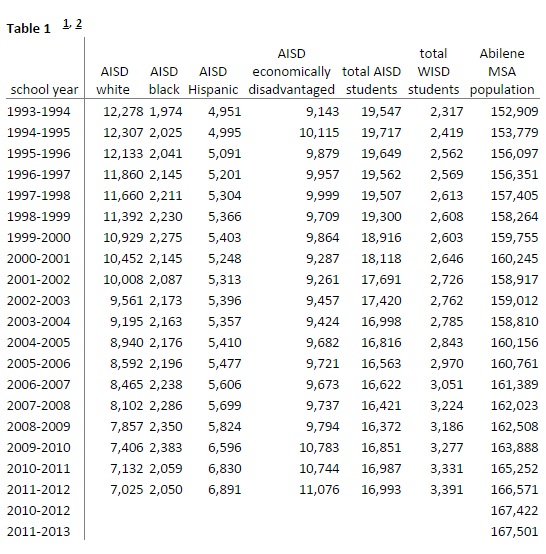 I am hesitant to suggest that that a racial motivation for demographic composition of the AISD, but the 1993 decision to racially balance the two AISD high schools makes this an undeniable element in the issue. A review of historical demographics for both the AISD and Wylie ISD allows one to draw conclusions about race trends in the AISD.

Going back to the 1993, the white population in AISD was at its peak in the year before the boundary revision and has declined by 3.4% per annum following the first boundary changes. During the same period, the black population in AISD exhibited slight annual growth of .3% and the Hispanic population grew by 1.5% each year. This is also summarized in Table 1.

During this same period, Wylie ISD’s enrollment has grown by 1.9%. This shouldn’t be misconstrued as cannibalization of AISD losses. The absolute losses for AISD are, on average, 2.3 times larger than gains in Wylie ISD enrollment and begs a questions for a later date: if not WISD, where did they go?

With a stable Abilene-area population, declining white AISD enrollment and a concomitant drop in total AISD enrollment, one wonders about the implications for residential values that serve as tax base to the AISD and WISD. These values are summarized in Table 2.  In the year following the 1993 boundary revisions, residential taxable values in the AISD fell 2.7% in real terms 3.   Across the years that followed and with the exception of 2001-2, residential taxable values in the AISD rose by 1.6% annually. 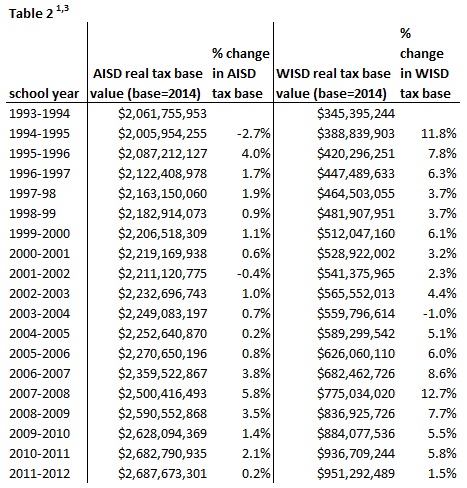 The data demonstrates that the conventional wisdom regarding the consequences of AISD’s decisions is correct: AISD boundary changes have consequences for our local tax base. My ambition was to analyze both boundary events by analyzing housing sales dating back to the 1993 boundary change. Unfortunately, NTREIS (the North Texas Real Estate Information System – the entity who archives Abilene real estate sales records) only goes back to April 2005. Still, this gives one the opportunity to estimate the impact of this second boundary change using housing sales.

With this limitation acknowledged, I used NTREIS data 4 from April 2005 through February 2015 yielding 13,716, Abilene-area sales. In this data, my focus was sales in the Brookhollow – River Oaks – Old Elmwood – Tanglewood area served by Austin Elementary. I chose these sales because they represent a population that can more easily make economic choices about where to live. Important to this analysis, their social costs can be measured hedonically through real estate sales following the boundary realignment of these homes from Lincoln Middle School to Mann Middle School.

To predict sold price, I control for conventional variables and employ an ordinary least-square regression to make my estimation. All dollar figures were adjusted to real terms using the CPI for housing. A priori, I assume that square footage, full-baths, half-baths, and the presence of a pool will positively impact the sold price. The property’s age and the number of days the house languishes on the market negatively affect sold price. To look at the impact of boundary changes, I add the following binary variables and my a priori expectations:

The outcome of the regression yielded the following results, all of which match my a priori expectations and possess a statistically significant relationship with the inflation-adjusted, sold price of a house in Abilene: 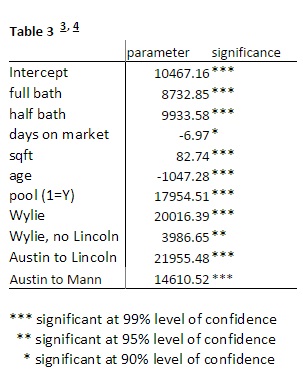 The estimated $7,345 loss in property value borne by Abilene ISD taxpayers currently in Austin-Mann district and the $3,986 benefit to Wylie ISD homes due Lincoln’s closure and boundary realignment is one in a series of n-th ordered effects arising from AISD policy. The expense of continued sprawl of roads, water lines, police and fire protection along with other public services as people vote with their feet for the district they prefer are the unintended consequences of AISD policy makers who approach redistricting like a child’s placement of a toy soldier. They seem to have forgotten – twice – that these aren’t toy soldiers, but people with preferences and they are willing to demonstrate these preferences by leaving.

Jared Reynolds – former student and now colleague of mine at HSU – likes to quip “Charles Hundley was the best superintendent that the Wylie schools ever had”.   After looking at these numbers, all I can say is:  it hurts to laugh.